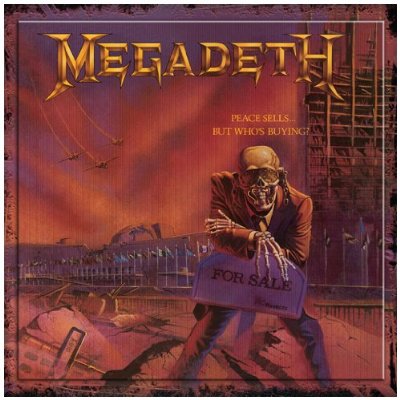 Let’s say you were a former member of one of the most popular bands of all time. You have one third of the songwriting credits for four songs on their first album, which is also probably their least selling album. Still, the album probably sells a lot of copies every year. How much money do you think you could get for that?

I’m guessing about $18,000 a year (no proof, but it sounds right). You’d be tempted to think that you don’t have to, like, get a job, but you can’t really live off of that. At least not very well.

The point is, if Megadeth hadn’t worked out, I think Dave Mustaine would have been pretty much justified if he’d committed suicide. He was kicked out of Metallica for drinking too much right before they recorded their first album. Then they all became art-collecting billionaires. If he had only cooled it on the jaeger shots he could have bought a Picasso. That’s a tough thought to wake up to every morning, $18,000 a year in free money notwithstanding.

But he started his own band, and also became a millionaire and a beloved metal dude. Compared to the other dudes who were kicked out of famous bands, he actually had the most luck. He never resorted to making a “Best of the Beatles” style Metallica exploitation. He didn’t become a roadie for the band that fired him, like Rolling Stones co-founder Ian Stewart. The only guy who’s close is Traci Guns, who had a couple hits with his mediocre hair metal band LA Guns after leaving Guns ‘n’ Roses.

Anyway. The question is whether Megadeth are worth a damn. The answer is: sort of.

Going from Kill ‘em All to Ride the Lightning, you can feel Mustaine’s absence from Metallica. The songs credited to Mustaine on KEA have a distinct gutter-rat swagger that Metallica never managed again. Mustaine, I think, was responsible for riffs like the galloping intro of “Four Horsemen” or the dirty and brutal blues scale main riff of “Jump in the Fire.”  The guitar work sounds like ‘70s proto-metal bands more like Budgie than the operatic then-current British metal of Iron Maiden.

Metallica replaced that immediacy with epic grandeur and ambitious progressive rock structure. Mostly, they traded up. But the top of the title track on Megadeth’s debut  “Killing is Business” is a perfect example of the loss. That intro is a mean, mean riff.

The vocals and the lyrics are not up to the standards of the guitars, unfortunately. Mustaine is a terrible singer. And he tries to compensate for his inability to sing with smart-ass attitude. Which would be fine, except he’s nowhere near as clever as he thinks he is. Like “Peace Sells, but who’s Buying”: what the fuck is that supposed to mean? It’s like a bumper sticker slogan with no message. Is it a joke? Does Dave Mustaine think it’s some kind of pun or play on words? Are we supposed to be worried about who is in possession of peace? Is it a lament for a war torn world? Are we supposed to be bowled over by its cynicism or something?

And then there’s the song itself, where Mustaine barrels through cynical platitudes with the affected drawl of a suburban teenage wise-ass. Mustaine’s personality is front and center here and with other Megadeth songs, and his personality is a liability, honestly. He’s an angry, unpleasant dude—you can see in his interview on “Some Kind of Monster” that despite his enormous success with Megadeth, he’s bitterly jealous over missing out on Metallica—and his lyrics and performances reflect that.

But Megadeth’s first two albums are scattered with enough of those unique, brawling riffs to be worth it. Their albums got worse as they went on until they had hits with mid-tempo corporate rock like “Sweating Bullets” and “Symphony of Destruction.”

So I think you have to listen to Megadeth’s music selectively: the Peace Sells… But Who’s Buying album is probably the best, but there’s good stuff on the album before and the album after. When Dave Mustaine is exploiting his great strength of writing pulpy riffs and shuts up, they’re a great rock band. When he’s mouthing off, they’re a chore.

Obviously, though, the scene in SKOM where he cries to Lars is the reason motion pictures were invented.