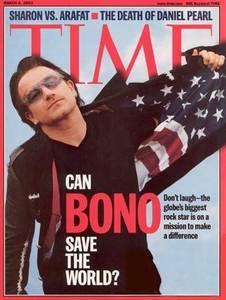 If you subtract his humanitarian/political issues, Bono is basically  an ego monster rock star cartoon. He’s so pleased with himself he’s almost on Tom Cruise-level fame-related sociopathy. Even when he’s trying to be modest it’s cranked to 11, like when he tried to cover for the failure of “Pop” by saying the band was reapplying for the job of best band in the world. Ugh. Dude. Come on.

The Edge is as much of a lame shit as Bono but gets away with his lameness by merely being the guy standing next to Bono. If you ever want to get a sense of a smug unpleasant uptight rich dude, pay attention to his scenes in “It Might Get Loud.” He’s a guitar effects master and can write a catchy tune but watching him struggle with a rudimentary blues riff is like watching a millionaire accountant unable to do subtraction.

Their Status as a Global “Brand”

Is becoming an inescapable part of being a super-star? I guess that being a big rock band anytime after 1980 is like being part of Twitter or Costco or something. You generate a lot of money, which necessitates a certain amount of organization. And if you’re trying to be a moral person you’re going to try to figure out what it means when that organization earns and spends money.  And you have to define a corporate culture and make strategic partnerships with Apple or Bill Gates or something. Then you find out that your accountant actually did his/her job and everybody is mad at you for tax dodging.

Most of the members of U2 are only barely performing their jobs at the professional level. The Edge’s guitar playing is 90 percent delay and Adam Clayton’s bass playing is almost entirely eighth notes.  That’s high school shit. Drummer Larry Mullen should be called “viagra overdose” because he’s always fucking stiff.  It would take them weeks of trial and error to cobble together the set-list of your average wedding band and it still wouldn’t groove. Collectively they are more than the sum of their parts, but they’d  have to be, as the sum is really, really small.

Their Greatest Hits are Either Inherently Terrible or Overplayed to Death

“With or Without You,” “I Still Haven’t Found What I’m Looking For, “Pride (In the Name of Love),” “Where the Streets Have No Name, “One” and “Sunday Bloody Sunday” are like a murderers’ row of songs I never want to hear again. I have no idea if it’s because the songs suck or because I’ve heard them a billion times.

The Lyrics are Distractingly Terrible

It must have rained a lot in Ireland in the mid ’80s.  “Unforgettable Fire and “Joshua Tree” lyrics are like teleprompter copy for the Weather Channel. Everything’s about howling wind, the sky or the rain. The weather report is occasionally interrupted by non sequitur Biblical allusions and fear of walls and blindness. Or maybe it’s just weird statements or oddly curated quotes like “a woman needs a man like a fish needs a bicycle” or “in New York summers get hot.” (also: weather.)

Previous U2 coverage here: Talkin U2, an introduction.