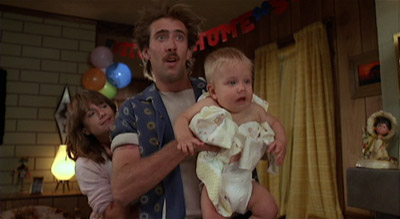 A friend of mine went and got his wife pregnant. For him, it’s a life changing experience. For me, it’s an excuse to show off my expertise in caring for babies.

Being a parent is like playing a video game. You start on the easiest level without any skills. As you get better, the game gets harder. This isn’t to say that infants are easy to care for, particularly if you’ve never done it before. But infants are immobile, which counts for a lot.

While the infant is breastfeeding, the mom is the boss. Dads can be good employees by taking some initiative and owning important business practices like changing diapers, bottle feedings, getting the infant to sleep and ridding the baby of snot and gas. You’re going to learn to be a specialist in one or all of them.

Each of those tasks has different challenges. Changing diapers rewards efficient and quick thinking. Getting a baby to sleep and eat rewards patience and sticking to a disciplined routine. Your baby is apt to squirm, roll over or kick when you are trying to get a diaper on. As long as you are thorough, gentle and quick, you can approach it however you want.

Related: inventing euphemisms for body functions is really fun. We started with “she’s the mayor of Browntown,” shortened it to “Browntown” and flipped that into “Brownton Abbey.”

Getting an infant to sleep isn’t an application for improvisation. It calls for steadiness and patience. If a position or a rhythm works, you have to hold it until it stops working, which means dealing with physical discomfort and boredom. That sounds easy but believe me, it is not.

Babies can’t blow their nose. So it’s your job to get the boogers out of their nose. You should get a device called a frida. It’s basically a short, thin hose attached to a plastic tube. You stick the tube in the baby’s nose and the hose in your mouth and suck the mucus out. Babies hate this and you will feel like a self-loathing snot vampire. But it’s effective and they get over it.

Burping a baby remains to me as mysterious as casting spells. I’ve done it thousands of times but still do not understand it. Look elsewhere for insight.

If you’re watching your baby by yourself, use the bathroom the second they are safely asleep. They could wake up five minutes after they fall asleep. It’s hard to find the necessary serenity to calm a baby when your bladder is screaming at you.

The optimal time for an infant to be awake is 90 minutes. There’s a whole book about it, but the important information can be distilled to a sentence fragment: put the baby back to sleep 90 minutes after it wakes up. The time frame will have a high success rate until they are about six months old.

Following the advice in the book and video The Happiest Baby on the Block will 1) make you feel like a lunatic and 2) be almost revoltingly effective. When the baby cries, hold him/her parallel to the floor, rocking them and saying “shush” in their ear at the same volume they are crying. It feels like a harsh, punishing thing to do to a baby. It feels wrong. You will want to sing or speak gently. While older babies will respond to that sort of thing, newborns like the shushing better.

Expect people to treat you very differently when you’re out in public with your baby. I’m a white dude. When I am in public with my daughter, older black and Latin women—people for whom I was previously largely invisible—now greet me with warm smiles and bright eyes. I could do something crazy, like ask them to loan me money or tell them I’m running for office as a Republican and they’d keep an open mind. Women carrying babies don’t enjoy the same automatic approval because they’re expected to.

Fellow fathers will nod at you as you pass. It’s like being part of a secret club except it is totally not a secret. Just nod back. It’s fun.

You will be invisible to most women under 30 when you’re with an infant. I don’t know why exactly but I just know that they don’t have time for your noise.

If you show up at a place full of college students with a party atmosphere, you can almost feel the crowd stiffen. It’s a real bummer for them to see all that adult responsibility right in front of them. Conversely, it will be hilarious for you.

And this was the most unexpected thing: caring for an infant will likely be the least narrative-driven period of your life. You will be pretty happy but there will be no stories to tell about it. I saw friends a couple months after my daughter was born and said that while spending time with my daughter was a staggeringly rich and rewarding experience, I didn’t have a single anecdote about it. I can turn a story about seeing a guy in a funny hat into a five-minute bit. When my daughter was a newborn I would just drip words like “beautiful” and “amazing” like some sap with a thesaurus.